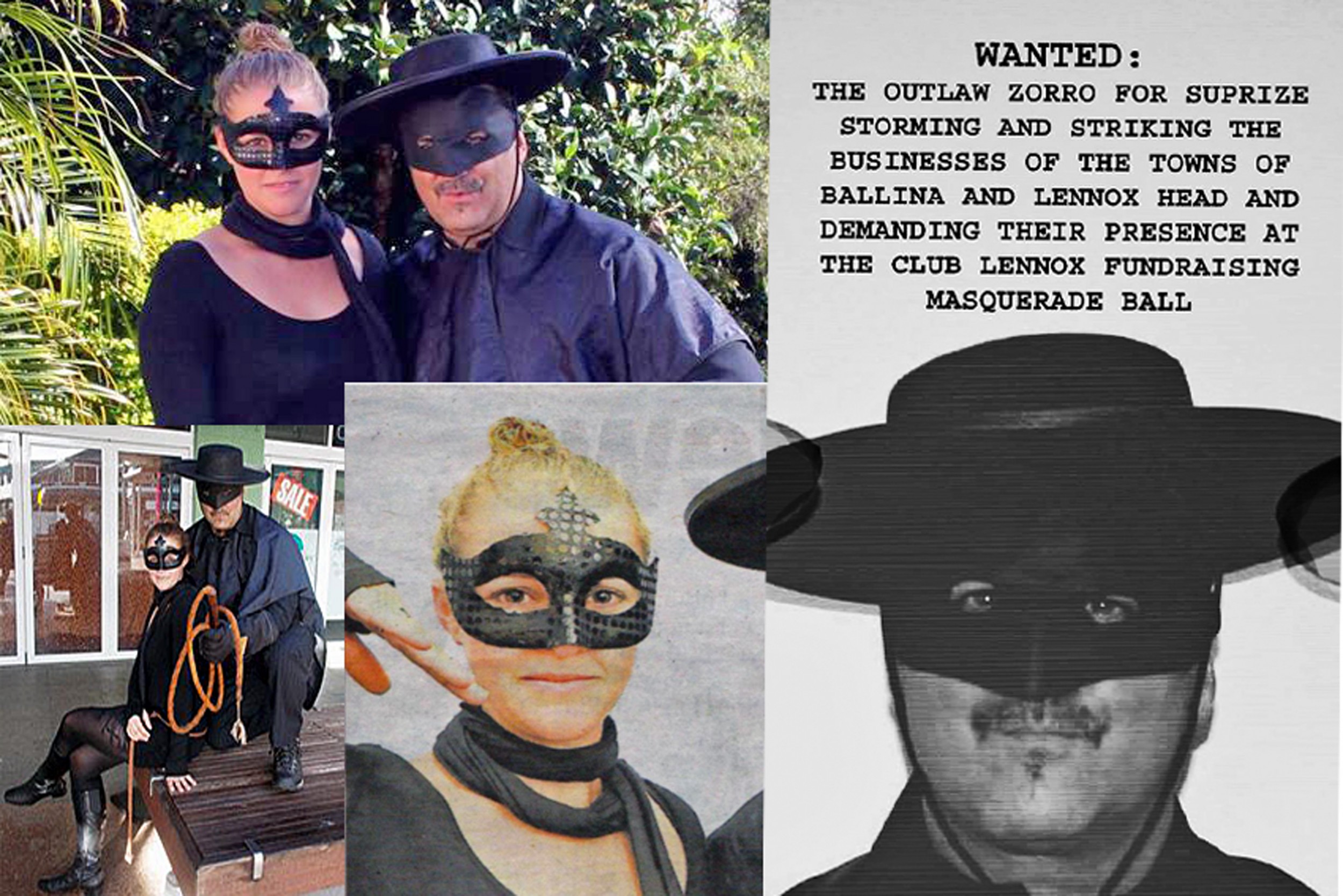 Long retired in California, in late 2012  Zorro’s sword-hand twitched when news arrived from a distant land  of what some financial oppressors in Sydney Australia had done to a small community in a province on the Far North Coast of New South Wales.

Initially under the guise of an amalgamation, a takeover coup was instead staged by the mean spirited repressive authorities from the big city. They had destroyed the assets, literally closed the doors and thrown away the keys to what was once the community owned Lennox Head Bowls, Sports and Recreation Club.

Early in 2013 the local community rallied, and a fundraising committee was set a target of raising $185,000 to re-establish a new community owned club.

One of the many hats of Lennox Head citizen Vic Leto is a D.J., so along with Allen of Disco Statik they offered their services to stage a Kids Disco as the first fundraising event. It was by now April and with no venue the Disco was held at the Lennox Head Community Centre.

(read a review of the event and the progress of other fundraisers to help save the club here):  http://lennoxwave.com/2013/04/big-weekend-club-lennox/

Fast Forward to mid-July and at critical point in the revolution:

Vic walks into a situation to see one of the towns most seasoned champion charity fundraisers Tracey Armstrong hyperventilating into a brown paper bag. By now the fight against the oppressors had taken its toll and even this proven campaigner was stressing over the prospect that the major fundraising event may have to be cancelled.

The Grand Masquerade Ball was scheduled to bring the funds that would lead the momentum toward the final charge that would define the ultimate success or failure of the fundraising target. But after many months of battle the citizens had become weary and lack of support meant the event and indeed the future club seemed lost.

In a previous life Vic had known Zorro and felt he had no other option but to contact his old amigo. Time was of the essence and unlike centuries past a message via carrier pigeon wouldn’t suffice and so sent an email pleading for Zorro’s immediate assistance.

Within days Zorro and his lovely accomplice Elena were seen on the local streets demanding the citizens’ presence at the Masquerade Ball. The wealthy were especially targeted, and the couple suddenly stormed many elite business compounds of the province by surprise.

Especially  caught off guard was the head scribe of the shire newspaper. The editor of the Ballina Advocate was held captive in his own office with a blade to his neck  and was issued an ultimatum: “Spread this story of goodwill…OR ELSE!!!”

(You can actually watch the exclusive video caught on security cameras when Zorro and Elena stormed the newspaper office):

In one particular stoush when Zorro was challenged by a Comandante of a large financial institution who objected cynically:

“why should I contribute?” Zorro’s tongue became sharper than his blade and he countered;

“Because Signor while wealthy men sit on their fat wallets and do nothing a community is surely doomed to failure!”

On hearing this, the Comandante’s own personal secretary rose from her chair and did in spite decree,

“I shall buy a ticket and be in attendance!”

And with a tip of his hat Zorro thanked the senorita and the last sound the Comandante heard was the swish of Zorro’s cape as he  and Elena disappeared.

The results: the Ball fundraiser contributed $17,000 toward  an eventual total of $200,000. Quite remarkably the target was reached in less than a year, through a variety of other staged events, raffles, a  new membership drive and actively seeking out donations.

In the end the new community owned Club Lennox was open Boxing day 2013.

Zorro vanished never to be seen again and while his assistance was a great help, he alone did not save the club. Like all revolutions against oppression and tyranny, success is only made possible after massive voluntary contributions come from an impassioned and bonded community that come together to support each other. Zorro’s presence just happened to remind the citizens of their own inner bravery, and he re-ignited this just at the time their faith had waned.

Oh, and despite any rumours, Vic Leto continues to deny he has any knowledge as to the whereabouts of Zorro and just exactly who  is the identity behind the mask 😉  Z 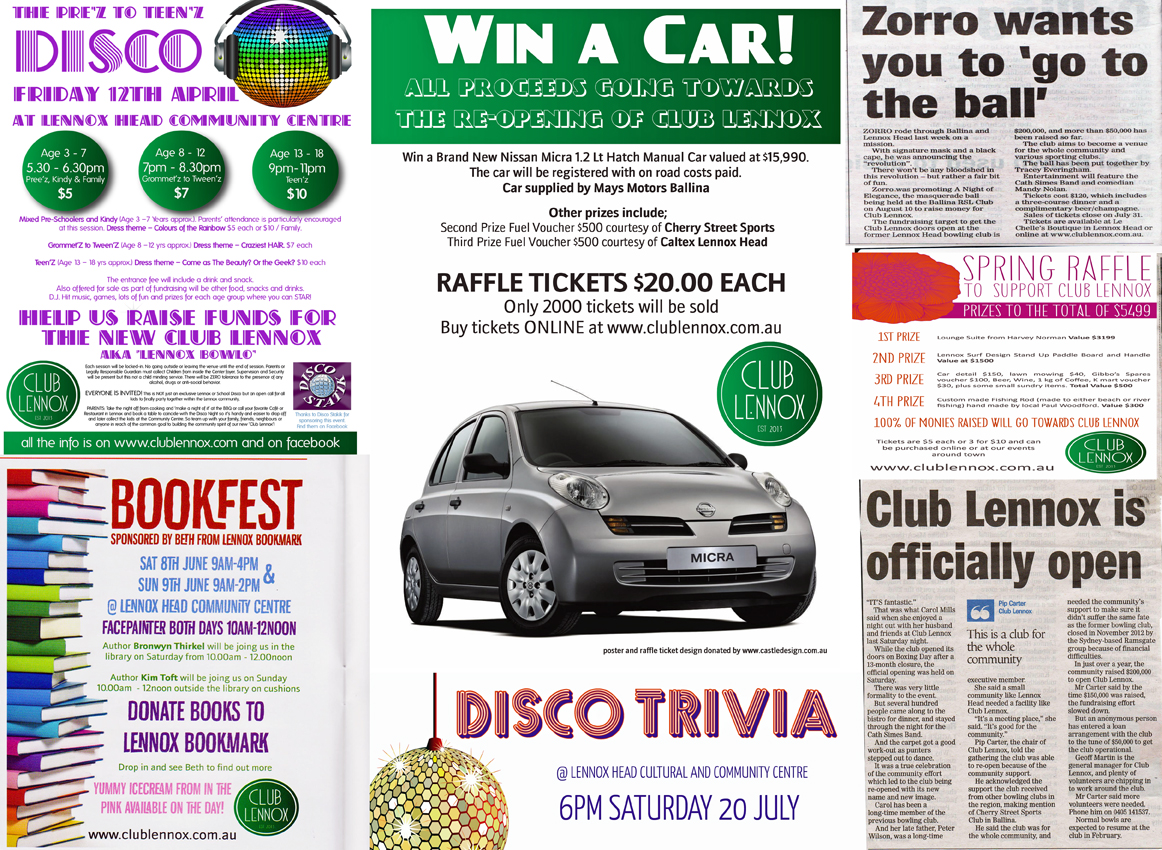 Just some of the posters and headlines of Club Lennox  in 2013.